Tournament players will easily be able to track their current position in the tournament via their Tournament Rank stat. No more having to go back and forth between the Tournament Table and Tournament Lobby. You will clearly be able to see where you stand, as well as where everyone at the table stands. 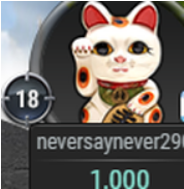 The Tournament Smart HUD Box will provide information on a player's total Tournament Winnings, as well their current Leaderboard Ranking, saving you the hassle of doing your own investigation on other Tournament players.

Tournaments will also have their very own Heat Index, and Chip Graphs.

*In the cash table and the tournament table, it shows the flop% data of the current session.

Did this answer your question? Thanks for the feedback There was a problem submitting your feedback. Please try again later.
Last updated on February 12, 2020